For the exploration of dinosaurs, all humans have been working hard, and how do humans determine the skin of dinosaurs? In fact, in the excavation of dinosaur fossils, some fossils had dinosaur skin on them. The question of whether Tyrannosaurus Rex has feathers has attracted the attention of many dinosaur lovers. And there are many exaggerated recovery maps on the Internet. The tyrannosaurus skin imprint fossils currently found are scales or chicken skin-like traces, no feather imprints have been directly found, and no long feather traces have appeared on the bones. Our Dinosaur Fossil Factory also currently has fossil reproduction services. There is no evidence that Tyrannosaurus rex has no long feathers. At least it is relatively certain that it has feathers and it is certainly not full body coverage. Do the relatives of Tyrannosaurus have clues? The answer is that no traces of feathers have been found in the fossil tyrannosaurids currently excavated. Although no traces of feathers have been found in Tyrannosaurids, there are indeed feathered members in the entire evolutionary tree of Tyrannosaurids. Among them, there are feather fossils of Emperor Dragon and Feather Dragon. Today we can only admire Amusement Park Animatronic Dinosaur. 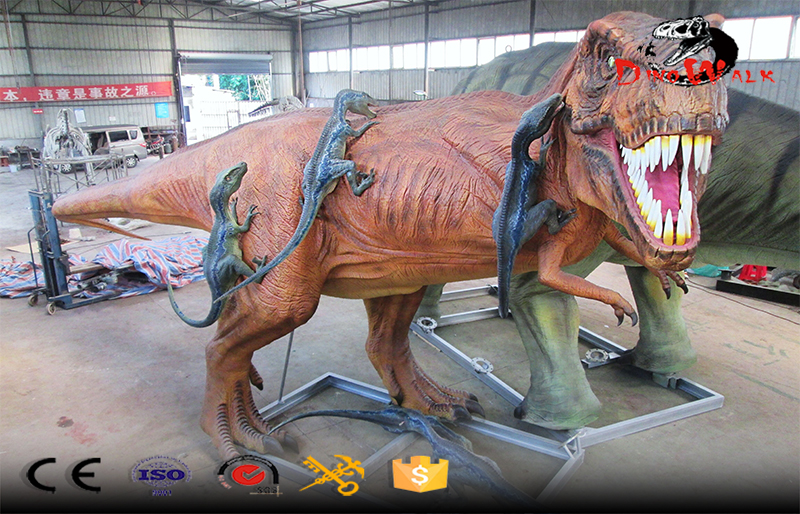 There is also a very important point, which is often forgotten when the artists' brains are wide open. Animals with a larger body shape will have a relatively reduced hair coverage, because their huge body shape can generate a lot of heat, and excessive body hair is not conducive to heat dissipation (except in extreme environments, such as mammoths). Through research, the environment in which Tyrannosaurus Rex is located is not an extremely cold climate. As an animal with an average body size of 7 and a half tons, if it is covered with thick hair, it will be very detrimental to its survival.

Previously, feathered dinosaurs were considered petite and small, until the discovery of the Feather King Dragon in 2012. The restoration pictures of the "weed finch" who painted Tyrannosaurus Rex as a thick feather are basically just entertainment. To sum up, it can be seen from the fossils with scaly traces that the Tyrannosaurus Rex is not covered with feathers all over the body. Considering the basic heat dissipation problem, it will not be a thick feather like the "marijuana bird". However, from the "goose-like skin fossils" and the prevalence of feathers in the osteosaurids, it can be guessed that Tyrannosaurus may have feathers or a shallow layer of feathers on its body. But it could also be bare scaleless skin + scales, like in Jurassic Park. However, verifying these points needs to be proved by more relevant fossils.

The discovery of feather fossils by dinosaurs is nothing new. The first dinosaur fossil with feather marks was discovered in 1996 in western Liaoning, China. Since then, 1-2 feathered dinosaurs have been found almost every year. These dinosaurs are basically from western Liaoning, China, because the geological environment here is special and can retain feather traces. It has also attracted the attention of scholars around the world for decades.

Previous: Do You Know the Trouble of Making Animated Dinosaurs?
Next: Bird Information During the Dinosaur Period