Study Finds That Dinosaurs Did Not Extinct After Asteroid Hit Earth

The Dinosaur Egg Model Manufacturer understands that on our planet, many species once disappeared after appearing, which is an inevitable stage in the history of biological evolution. But why such a huge and dominant family-like dinosaurs suddenly disappeared from the earth, this has caused us to speculate.

Scientists have been arguing about the extinction of dinosaurs. Some say that the earth had a geological orogenic movement at that time because there were many high mountains growing on the flat ground, the swamps were reduced, and the climate became less humid and warm. The dinosaur's breathing organs can't adapt to the dry, cold and hot air, and in winter, the dinosaurs' food is gone, so they are on a dead end.

Some say that the supernova explosion caused a strong change in the Earth ’s climate, and the temperature suddenly dropped and then fell very low. Others say that dinosaurs eat a lot of flowering plants. There are a lot of toxins in these flowers, and the dinosaurs eat a lot, so they are poisoned and die. The evidence is that flowering plants began to appear at that time. Others say ingeniously, because huge animals like dinosaurs eat too much and constantly fart, releasing a lot of methane gas into the air. Because of their large number and long survival time, the destruction of the earth's ozone layer caused a devastating climate. There are even people who say that the aliens ran to Earth to hunt because they thought the dinosaur meat was particularly delicious. The evidence is that the dinosaur bone fossils they found in the Arctic have traces like laser cutting. 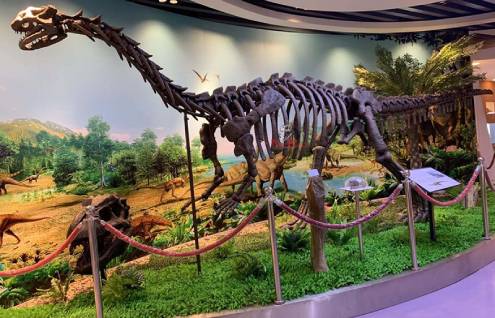 Some scientists also believe that due to the drop of the sea surface, new land came out, and some dinosaurs have the habit of migrating, went to other places, not adapted to the environment there, and eventually became extinct. In short, it can be described as diverse, and there are no exceptions. However, it is generally accepted that the meteorite impact theory. Many people believe that dinosaurs were extinct due to the impact of asteroids on the earth. Recently, Canadian scientists discovered through some fossils that dinosaurs may not have been completely extinct at that time, but survived for about 700,000 years.

According to the British "Daily Mail" report, scientists at the University of Alberta in Canada have used the latest "direct dating method" to re-determine the age of the herbivorous dinosaur dinosaur fossil found in New Mexico. The results show that the fossil skeleton was 64.8 million years ago. This means that after the so-called dinosaur extinction 66.5 million years ago, some dinosaurs survived for at least another 700,000 years.

The scientist who led the study, Larry Seaman, said that using laser beams to directly scan fossil bone particles and then radioactively dating them, as long as the composition of lead isotopes in bone fossils is determined, the animal's death can be obtained. Time even includes the diet before this creature dies.

Larry analyzed the reasons for the survival of these dinosaurs, including that the vegetation in some places was not completely destroyed, and the sauropods survived. In addition, some dinosaur eggs preserved in extreme weather may also be a factor in the survival of some dinosaurs. Previously, many experts believed that 65.5 million years ago, the fragments and dust formed by the impact of a huge meteorite blocked the sunlight, causing extreme climate change, and subsequently causing the death of a large number of plants around the world, which also caused the extinction of dinosaurs.

Previous: What are the top three favorite dinosaur gifts for children？
Next: How Much Does Simulation Dinosaur Exhibition Rental Cost?