Which Locations of the Simulated Electric Dinosaurs Are Most Vulnerable to Damage?

Recently, customers often inquire about some problems related to the simulation of electric dinosaurs, most of which is which positions are most vulnerable to damage. For customers, they are very concerned about this issue. On the one hand, it depends on the cost-effectiveness. On the other hand, it depends on how high the practicality is. Will it be broken after a few months of use and cannot be repaired? Today medium size animatronic dinosaur factory will list which locations are most vulnerable to damage.

This is the location where the simulated electric dinosaur is most likely to be damaged. Visitors will be curious about how the dinosaur’s mouth moves when playing. Therefore, it is often torn by hand, resulting in damage to the epidermis. What're more, visitors love dinosaur teeth and want to collect a few homes as a souvenir.

In some scenic spots that are not strictly guarded, it is commonplace to simulate electric dinosaur claw breaks. This part itself is relatively fragile, and it is also a more eye-catching location. Tourists who come to play like to shake hands with it. Over time, the handshake becomes more powerful, and over time the claws are damaged. 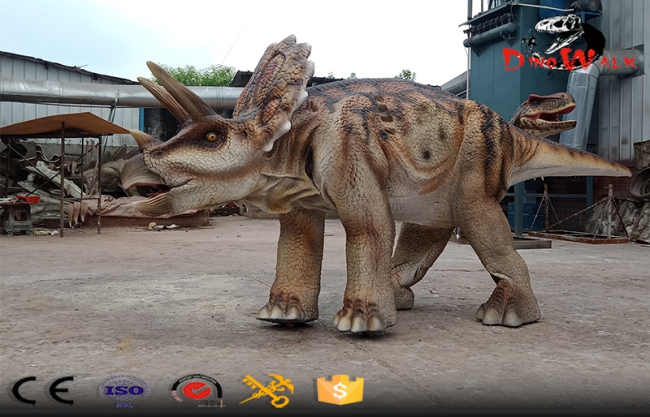 3. The tail is broken

Most simulated electric dinosaurs have a long tail, which moves like a swing. Some parents like to let their children ride on the dinosaur tail to take pictures. Not only that, but some adults also like to hug the dinosaur's tail and dangle it. The internal welding position can easily fall off due to external forces, causing the tail to break.

There are some small simulated electric dinosaurs that are most likely to encounter skin damage. On the one hand, it is due to the large number of people climbing and playing, and on the other hand, because the motor movement is too large, resulting in insufficient skin tension and damage.

Although the above four positions are the easiest to damage the simulated electric dinosaurs, these are minor problems, and the maintenance is relatively convenient, and they can be repaired by themselves.

Previous: The Difference between Simulated Dinosaur Model Silicone Material and GFRP
Next: The Six Legendary Dinosaurs(part 1)