Speaking of dinosaurs, many people must have the first impression that they are ferocious and huge, especially the real existence of simulated dinosaurs, which gives us the most intuitive impression. Hundreds of millions of years ago, there were a large number of dinosaurs on the earth. Judging from the fossils that have been discovered so far, there are about 700 kinds.

1. The ancestor of the horned dragon in China

Ceratosaurus includes triceratops, protoceratosaurus, Pentagonosaurus, and other species is the most common simulation animatronic dinosaurs. Ceratosaurus lived in the Cretaceous period. Unlike other dinosaurs, ceratosaurus had unequal Numbers of horns on its head, which were as sharp as rhinoceros horns. Because of the presence of these horns, ceratosaurus increased its fighting power, so ceratosaurus was known as the most fierce plant-eating dinosaur. Ceratosaurus fossils are mostly found in North America, but studies have found that the ancestors of ceratosaurus were actually in north China and the Republic of Mongolia. 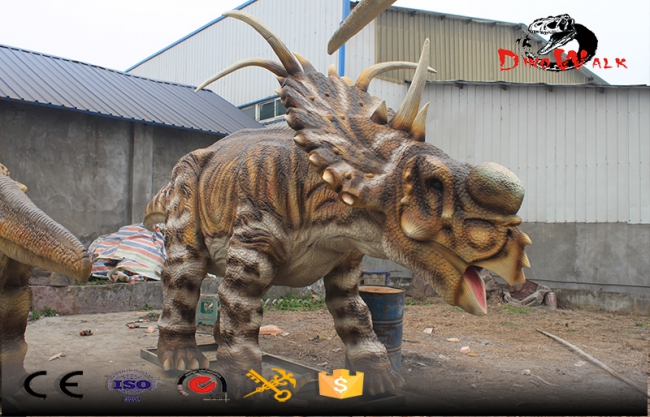 In 1970, a Mongolian and Polish joint archaeological team discovered the fossil of Bagaceratops in the desert. Five complete skulls have been discovered so far. These skulls come from different ages of the Bagaceratops, so paleontology has more research on the growth of Bagaceratops. These fossils are currently deposited at the Paleontological Institute in Warsaw, Poland.

Like other ceratosaurs dinosaurs, Bagaceratops are herbivorous animals. During the Cretaceous period, the geographical range of flowering plants was limited, so Bagaceratops might feed on dominant plants at that time, such as ferns, cycads, and conifers. Bagaceratops may use their sharp beak-like mouth to bite leaves or needles.

The above information is provided by walking animatronic dinosaur manufacturer.

Previous: Which Locations of the Simulated Electric Dinosaurs Are Most Vulnerable to Damage?
Next: The Six Legendary Dinosaurs(part 2)