3. The most primitive Eoraptor

The frequency of Eoraptor's appearance in animatronic dinosaurs can be as high as 90%, and it is considered to be the most primitive dinosaur among the dinosaurs discovered so far. Eoraptor is a small carnivore, about 1 meter long and able to walk on two legs. It mainly eats small animals and can sprint quickly. After catching the prey, it will tear the prey with its claws and teeth. However, it has both carnivorous and herbivorous teeth. The leaf-shaped teeth are similar to the teeth of the procaine, so it may also be an omnivorous animal.

Eoraptor mainly relied on their hind limbs to walk, but they occasionally walked on all fours. The bones of the limbs of the Eoraptor are thin and hollow, and the body is very light, which can quickly catch prey. Eoraptor has a pair of forelimbs that are good at catching prey. They can not only catch small reptiles and early mammals but also catch prey similar to their own. 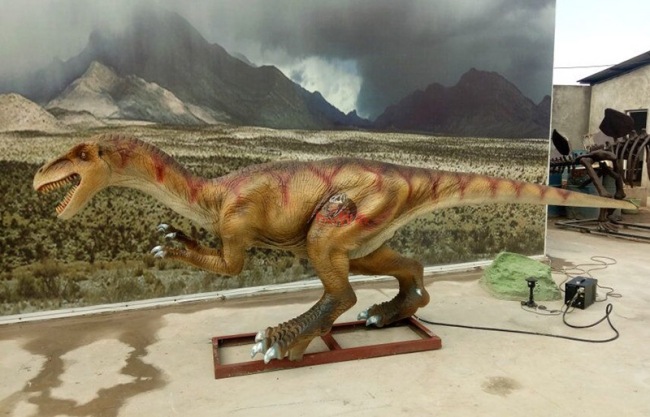 During the Lower Cretaceous period, northern Europe was covered with most lakes. The heavy claw dragon inhabits the river bank and uses its strong forelimbs to catch fish. This way is like a grizzly bear today. Before the discovery of its close relative, Crocodylus-like dinosaurs, Baryclawsaurus was thought to be the only dinosaur eating fish. On the other hand, the bones of a young Iguanodon were also found along with the bones of the claws. Although there is no definitive evidence, it is possible that the heavy claw dragon may also feed on the carcasses of other animals.

The above information is provided by animatronic dinosaur factory.